The Belle of Two Arbors by Paul Dimond (Summer 2017) 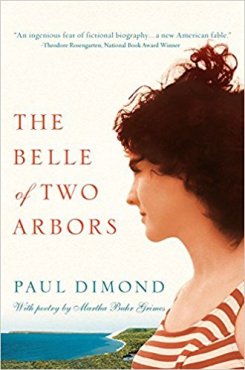 Our latest tour this summer is The Belle of Two Arbors by Paul Dimond, with poetry from Martha Buhr Grimes, published by Cedar Forge Press in April 2017.

Born at the turn of the twentieth century in Glen Arbor, near the dunes of Northern Michigan, young Belle is the first child of a gruff stove works boss and a crippled mother who weaned Belle on the verse of Emily Dickenson. When a natural disaster results in her mother’s death and nearly takes the life of her younger brother Pip, Belle creates a fierce, almost ecstatic farewell song. Thus begins her journey to compose a perfect Goodbye to Mama.

At 21, Belle ventures south to Ann Arbor for university, with teenaged Pip in tow. There, she befriends Robert Frost, Ted Roethke and Wystan Auden and finds that her poetry stands alongside theirs, and even with that of her hero, Dickinson. Her lyrics capture the sounds, sights, and rhythms of the changing seasons in the northern forests, amidst the rolling dunes by the shores of the Great Lake.

Despite the peace she finds, Belle also struggles in both homes. Up north, she battles her father who thinks a woman can’t run the family business; and clashes against developers who would scar the natural landscape. In Ann Arbor, she challenges the status quo of academic pedants and chauvinists.

Belle’s narrative brings these two places to life in their historic context: a growing Midwestern town driven by a public university, striving for greatness; and a rural peninsula seeking prosperity while preserving its natural heritage. Through the Roaring Twenties, the Great Depression, World War II, and the Post-War Boom, Belle’s story is hard to put down. Her voice and songs will be even harder to forget.

“The Belle of Two Arbors is a beguiling story about a talented woman from the back of beyond who dares to establish her own identity. Capturing the upper reaches of Michigan’s Lower Peninsula, Dimond creates a new American fable that, like the great novels of Willa Cather, both lacerates and heals: An ingenious feat of fictional biography.” –Theodore Rosengarten, National Book Award All God’s Children: The Life of Nate Shaw and MacArthur Fellow

“Paul Dimond’s Belle of Two Arbors is historical fiction at its most informative and engaging. Belle is poet, protectress, matriarch and muse, whether advocating for a more inclusive University in Ann Arbor or promoting the preservation of America’s premier national lakeshore in Glen Arbor. Fans of the poets Frost, Roethke, Auden and Dickinson are in for a treat: Belle weaves their histories in Michigan and the legacies of Dickinson and Frost in Amherst expertly with the fictional characters. A treasure of a read!” –Barbara Stark-Nemon, author of award-winning historical novel, Even in Darkness

“In the company of Paul Dimond’s extraordinary Belle, we witness the turbulence of a rapidly changing America in the first half of the 20th century. In her roles as poet, entrepreneur, philanthropist, and conservation leader, Belle interacts with a well-realized cast of characters, both imagined and real, most notably the poet Robert Frost. In this full and searching ‘portrait of a lady,’ Dimond renders the opportunities and obstacles that shape Belle’s story in such a way as to remind us that her world is also ours in the making.” –Donald Sheehy, Ed. The Letters of Robert Frost. Vols. 1–2

Since birth Paul Dimond has shared his time between Ann Arbor, home of the University of Michigan, and Glen Arbor amidst Sleeping Bear Dunes National Lakeshore in northern Michigan.

Prior to researching and writing The Belle of Two Arbors, Paul Dimond served as the Director of the Lawyers Committee for Civil Rights Under Law, tried several major race case that divided the U.S. Supreme Court and served as the Special Assistant to President Clinton for Economic Policy. He has also practiced law, chaired a national real estate firm and continues to spend his time between the two Arbors. He is an alumni of Amherst College and the University of Michigan Law School. Visit his Website.

Serena is a Bachelor of Arts graduate of Suffolk University in Boston, still interested in the nuances of politics and the interplay of words on a page to create vivid imagery, convey meaning, and interpret the world. She has moved from the sticks of small town Massachusetts to the outskirts of Washington, D.C. where she writes more vigorously than she did in her college seminars. Poems can be read in issues of Beginnings Magazine, LYNX, Muse Apprentice Guild, The Harrow, Poems Niederngasse, Avocet, and Pedestal Magazine.
View all posts by sagustocox »

Posted on May 19, 2017, in Past Blog Tours and tagged historical fiction. Bookmark the permalink. Comments Off on The Belle of Two Arbors by Paul Dimond (Summer 2017).