← The Jane and Bertha in Me by Rita Maria Martinez Blog Tour April 1-April 30
Book Trailer Reveal & Bonus Reading: The Couple Who Fell to Earth by Michelle Bitting → 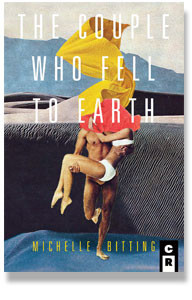 Hello everyone, we’ve got a new tour filling up for June 1-30, 2016: The Couple Who Fell to Earth by Michelle Bitting, a poetry collection published by C & R Press in March.

These meditations, cosmic-toned, yet utterly visceral, demonstrate Michelle Bitting’s continuing growth and power as a poet of love, loss, the daily and deeply human experience, together with a maturing eye to understanding greater mythological tropes. Woven throughout her contemplation of the terrible beauty and struggle of family dynamics, corporeal desire, the injustices and revelations of life in the 21st century, thrums a vital connectivity to the mystic and mythological strains of the past, newfangled to the present in a way that ultimately sheds light on what it is to be alive and conscious of who we’re called to be.

To read Michelle’s poetry is to take a wild, passionate ride through the rubble of the quotidian, to be shocked by sensual discovery and awakened to a relentless curiosity for both the surreal and historical. These poems travel–an expansion in service of communion with the world, confrontation and acceptance of self.

Here’s what others are saying:

In a multi-directional “one shape” of voices, time, people, spaces Bitting takes us in and out of her all seeing third eye poetics. We go into an orb of family, love, then we swoop out into the delight of humanity. And, in a sense, these refractions are the “the self’s / shady daguerreotype coming to surface / through exposure to light.” In day-to-day terms we find enlightenment and paradox—“ of death and peppermint,” of “birth and strange beauty,” of “Elysium nothingness” and “mythmaking machinery.” I find Michelle’s cosmic mechanics fused with historical platforms akimbo and the “sheen” of personal meditations, a rare accomplishment. A unique treasure of visions and voice. –Juan Felipe Herrera, Poet Laureate of the United States

There’s delirious beauty tumbling down every page of The Couple Who Fell To Earth. Michelle Bitting’s poems deal with the domestic and the feral; I’m caught up in “Eden-scorched mouths,” and “a sea of furrowed manes and exoskeletons,” and I never want to leave. She confronts personal history, the familiar body, the spiritual world, and the human condition in rich, wildly original language. –Bianca Stone, Author of Someone Else’s Wedding Vows

Michelle Bitting is a poet of the natural world but in a completely Transcendental sense. Like Emerson, her poems seem to claim that, even in the face of all kinds of traumatic loss, “beauty breaks in everywhere.” The Couple Who Fell to Earth holds things of the world up to the eye in an effort to glimpse heaven, or as Bitting herself says, “Accept me. I love the dawn. / The sun is a sea / I throw myself into…” This book is all heart. –Jericho Brown, Author of The New Testament

Michelle Bitting’s first collection, Good Friday Kiss (C & R, 2008) won the DeNovo First Book Award. Her second collection, Notes To The Beloved (SPC, 2011) won the Sacramento Poetry Center Book Award and received a starred review from Kirkus. Poems have been published in the American Poetry Review, Prairie Schooner, Narrative, The L.A. Weekly, diode, Linebreak, and The Paris-American, and have been nominated for the Pushcart and Best of the Net prizes. She holds an MFA in Creative Writing from Pacific University and is currently a Ph.D candidate in Mythological Studies at Pacifica Graduate Institute. She grew up in Los Angeles near the ocean.

Serena is a Bachelor of Arts graduate of Suffolk University in Boston, still interested in the nuances of politics and the interplay of words on a page to create vivid imagery, convey meaning, and interpret the world. She has moved from the sticks of small town Massachusetts to the outskirts of Washington, D.C. where she writes more vigorously than she did in her college seminars. Poems can be read in issues of Beginnings Magazine, LYNX, Muse Apprentice Guild, The Harrow, Poems Niederngasse, Avocet, and Pedestal Magazine.
View all posts by sagustocox »

← The Jane and Bertha in Me by Rita Maria Martinez Blog Tour April 1-April 30
Book Trailer Reveal & Bonus Reading: The Couple Who Fell to Earth by Michelle Bitting →